The Legend of the Biker Bell

Find your motorcycle clothing and accessories with personalized advice 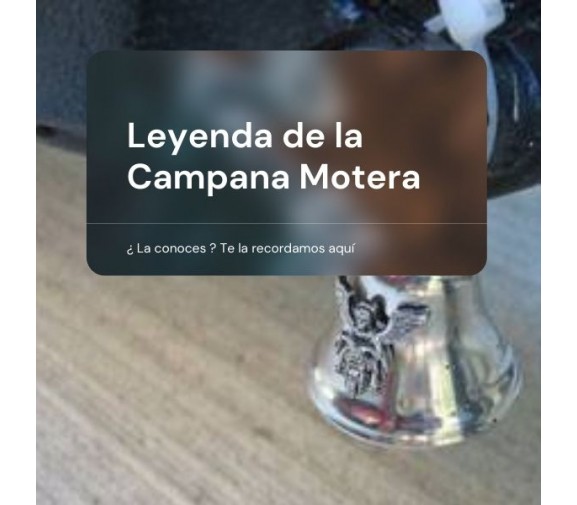 The Legend of the Biker Bell

We tell you one of the short versions of this legend. Always remember that if they give you a bell to hang on your motorcycle, no matter the model, it is a great proof of friendship or of a person who cares about you and wants to protect you.

Legend has it that many years ago, on a cold December night, an old motorcyclist was traveling back from a trip to Mexico, with his saddlebags full of toys and some other miniatures for the children of a shelter that was near the place where he worked.

As he traveled that night, he thought about how lucky he had been in life with him. Having a lovable traveling companion who understood his need to conquer the roads; in his old machine that had never left him in all the years they had shared and in all the places.

About 40 miles from the border, in the darkness of the desert, he spotted a small group of little nocturnal creatures, known as road goblins. You know, don't you? One of those that gives them to leave a shoe here, a piece of something there, a blown tire etc... and they are also in charge of digging the deadly potholes through which a motorcyclist can pass and crash. All this simply with the fact of giving them a little fun.

On his way, the motorcyclist, after coming out of a curve, was ambushed by a group of them, who lost control of his motorcycle and made him skid until he fell. In the accident, one of his saddlebags hit the pavement and came loose. Lying there, unable to move, the road goblins  began to surround him. Not giving up, he started throwing things at the approaching goblins. Finally, with nothing else to throw at them but a bell, he began to ring it, hoping the sound would scare off the dirty goblins.

A little less than a kilometer away, two other motorcyclists were camping. By the light of the fire, they talked about the day and comented their experiences: freedom, the wind that blew in their faces as they crossed the vast country. In the stillness of the night, they heard the ringing of what for them was a church bell. Driven by curiosity and anxious to know where that sound came from at that time of night, they began to follow the sound and arrived at where the motorcyclist lay about to be stalked by the goblins. With nothing more to say, and unified by the brotherhood that motorcycling gives, they ran to his aid, scaring away the goblins one by one, until they were all far away.

Feeling sincere gratitude for the help they gave him, the old man was quick to pay them for the service they had been able to offer him that night, and as is well known among motorcyclists, those who ran to his support refused to accept any payment. .

Not being able to stay without thanking them in some way, that old man ran to cut two pieces of leather from his saddlebags, tying one end to a bell, and the other to each motorcycle of the two travelers, as close as he could to the ground.

Tired, he told them that those bells he placed on their motorcycles would protect them from the goblins on the road and that if at any time they had a problem, they would simply ring the bell and some biker brother would come to their aid.

If you also want to give a bell to a colleague about motorcycle brotherhood, we let you the link here.